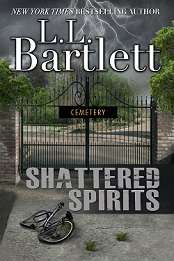 If it weren’t for bad luck, Jeff Resnick would have no luck at all!

While riding his new racing bike, Jeff is hit by an SUV, an accident which has a cascade effect on his life. He loses his job to a replacement, his girlfriend pressures him to move in, his bank accounts are hacked, and a restless spirit begs for his help—all in less than a week. But it’s soon apparent that his so-called random accident is anything but, and the murder of a close friend has a hobbled Jeff on the run. Can he discover who’s out to destroy his life—and threaten those he loves most?

Up ahead was a chain grocery parking lot. Richard braked and pulled into the lot, steering into a slot far from the store. He put the van in park but kept the engine running if only to power the air conditioning. “What’s wrong?”

Jeff said nothing and for a terrible few moments Richard was afraid his usually stoic brother might burst into tears. But then Jeff shook his head—not unlike a wet dog—and seemed to gain control once again.

“This damned cast has me feeling vulnerable—a lot more vulnerable than when I had my head caved in and my arm broken. This time I can’t run away in a dangerous situation. I really can’t defend myself at all.”

“What are you saying?”

Jeff finally faced him, his expression grim. “I want to buy a gun.”

“I know that, but it would take forever to get a permit and—”

“Hey, I’ve had permit for more than a decade. I reported my last gun as stolen, and I’ve kept up with the paperwork. I can legally buy another gun today.”

“No!” Richard said again. “We’re not going to bow to the lowest common denominator.”

Richard made an effort to hold his temper. “There’s a big difference between garnering information and potentially shooting a projectile that can kill or maim.”

“When push comes to shove, do you want to be defenseless?”

Richard didn’t answer. He’d been shot a little over two years before. He didn’t want to experience that ever again, nor be responsible—in one way or another—of inflicting that kind of misery on someone else. “So you’re prepared to kill—?”

Richard let out an exasperated breath. “I don’t think it’s going to come down to that.”

There was no way to refute that statement. Still, Richard needed to deflect the conversation—to get them both back on common ground. “We’ve got options, not the least of which is hiring bodyguards.”

“Who’d hole us up in some godforsaken place while we’d go stir crazy.”

“You’ve got that right. And never in my life have I felt so paranoid.”

The air conditioning continued to blast. Jeff had again turned away and Richard felt at a loss as to how to rectify the tense situation. “What do you want do to?” he asked finally.

“In this latest installment, L.L. Barlett shows us yet another element to Jeff Resnick while telling us an amazing story and bringing back the characters we’ve gotten to love so much.”
–Forward Scribes