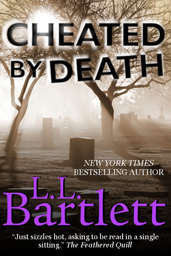 Jeff Resnick faces a new dilemma: someone is stalking his sister-in-law, Brenda, who fears that violence from protesters will escalate near the women’s clinic where she works. Or could the vandalism, threatening phone calls, and letters against her have come from her abusive ex-husband? Meanwhile, Jeff grapples with meeting his estranged father and the sister he never knew existed. Could Patty Resnick be the key to Brenda’s stalker? 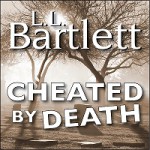 Available in Audio, too!
Performed by Steven Barnett 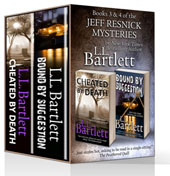 What happened on Christmas day … the day after the end of Cheated by Death? 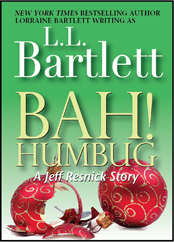 It’s Christmas Day, and Richard and Brenda are off to warmer climes, leaving Jeff and Maggie to spend Christmas dinner with Maggie’s family. But the Brennan clan has not rolled out the welcome mat for Jeff. It’ll be a Christmas to remember . . . but who wants to?

For Cheated by Death …

“This psychological thriller with a paranormal thread will keep the old wheels spinning trying to figure out the culprit. This tough, but somehow vulnerable psychic detective had just the right amount of edge to his personality to making him extremely appealing. The reader won’t find the time to discover a “psychic signature” in the pages of this book because it just sizzles hot, asking to be read in a single sitting!” — The Feathered Quill

“I don’t think those calls were a prank.”

Richard looked up at me from his seat at the kitchen table. The phone book was open before him. A pad with notes scribbled on it sat beside it.

“Here’s what I got last night.” I plucked a sheet of paper from the large Kraft envelope I held, and gave it to him. “Mind if I bum a cup of coffee? I’m out.”

“Help yourself. How many calls did you get?”

“Just one.” I got a mug from the cabinet and poured the coffee, took a sip and remembered they’d switched to decaf.

I explained what I’d heard in the background the night before. “I’d guess each was made from different public phones. The phone company should be able to verify that Monday. That could make it hard to pin down the bastard.”

Richard’s grim expression hardened as he stared at the paper.

“Take a look at this,” I said and tossed him the envelope.

He sifted through the stack of photographic prints—duplicates of those I’d given Sam Nielsen, only these had Post-It notes identifying each person. I told him what I was up to—and why.

“I appreciate you looking into this, Jeff.”

He cleared his throat. “Are you available Monday morning? I need another favor.”

“Unless they can get someone to cover for me, I have to be at the clinic every day this week. But I’ve called a couple of companies for estimates on security systems for the house. We’re probably the last holdout on the street.”

He was right. Every other home in this expensive neighborhood boasted a sign for the firm protecting it from mayhem.

“Has this got anything to do with those calls last night?”

“Everything. That and the fact Brenda’s ex is in town. What do you think?” He looked like he expected an argument.

“It’s a good idea. Amherst may be one of the safest towns in America, but why take chances? I could handle the whole thing for you—it would be a piece of cake.”

“Thanks. I don’t care what it costs. I want Brenda to feel safe here at home. I’m also getting an unlisted number. Now all I have to do is get her to quit that job. She respects your opinion. Do you think you could talk to her about it?”

“Sure. But I doubt she’ll listen.” I studied his guarded expression. “She’s worried about you, you know—besides the crap that’s already hanging over your head.”
“Making sure she’s safe is more important than anything I’ve got going.”

I wondered if I should push him for a better explanation, but he looked like he didn’t need another problem right then.

While I drained his coffee pot, we discussed various security options. It stroked my ego to know he trusted my judgment.

“In the meantime, do you think Maggie would let us borrow her dog? Just until we get a system installed,” Richard said.

“She’ll bark—that’s all we really need,” he said.

“It’s a good idea. Sometimes the best security system is a dog.” I considered the extra yard work that accompanied a large dog—which would be my responsibility.

He closed the phone book, and put it back on the counter as Brenda came in with a stack of mail. “Hey, Jeffy, what’s new?”

“Looks like I got suckered into going to that party tonight.”

“The one Patty told you about?” she asked, sorting through the envelopes and opening one.

“Yeah. I’d rather have a tooth pulled.”

Brenda stared at the paper in her hand, suddenly radiating tension.

“Is something wrong?” I asked

She frowned. “Look at this.” She handed me a creased sheet. A chill ran through me as I studied the one-word message in large type: YOU.

Richard sidled closer, his expression darkening. “Who was it addressed to?”

“Me, I guess.” She handed him the envelope. It said: Brenda Alpert.

“Whoever sent it obviously didn’t know she kept her maiden name.”

“What do you think it means?” Brenda asked.

“Me, either,” Richard agreed.

I studied the cheap business-sized envelope that could have been purchased in just about any store. A Buffalo postmark canceled the stamp. No return address, of course. The note looked like standard twenty pound copier paper. The font was common, the note printed on a computer laser printer, also standard in any office. Neither the note nor envelope gave me any kind of impressions. Damn.

“If you get another one of these, wear latex gloves to open it,” I warned her. “Just in case there’re any fingerprints.” Or Anthrax, or some other nasty substance manic pro-lifers have sent to pro-choice doctors and nurses in the past.

“Do you think this could be something serious?”

She stared at the sheet of paper, chewed at her lower lip. “Why would somebody do this?”

“It’s that damn health center you work at. Those protesters are dangerous,” Richard said.

“We all know your opinion on that subject,” she said.

“Well, now will you take it seriously? These nuts have targeted clinic staff before.”

“Not in a long time.” She turned away from him. “Jeffy, should we call the police?”

“Right now you haven’t got enough that’ll interest them. They’d rather wait until someone gets hurt before they waste valuable tax dollars on protection. But I’d definitely tell your supervisor at the clinic. You’re probably not the first to get a note like this.”

She nodded and I felt her tension ease. Apparently being a singular target was more frightening than sharing that privilege. But how did the protesters know her husband’s name? And if they did, would using it divert suspicion from them? Or was Willie Morgan playing games?

“Brenda, why don’t you call Maggie, ask her about the dog. Maybe she’d bring her over this afternoon,” Richard suggested.

“Okay,” Brenda said, forcing a smile. “I’ll call from the phone in the living room—this could be a marathon session and I may as well be comfortable.”
“I have to go out for a while,” Richard said. “Will you be okay for a couple of hours?”

“Don’t open the door to anyone while I’m gone, okay?” She nodded, gave him a quick kiss, and headed down the hall.

I waited until she was out of earshot before speaking. “You’ve got a stand-up lady, there, Rich.”

“First the Women’s Health Center. I don’t want to wait ‘til Monday to find out if other staff members have received one of these letters. Then I want to pay a visit to Mr. Willie Morgan.”

“It’s an awful big city. How do you plan to find him?”

“We can start at the Bison’s main office downtown.”

“On Saturday of a holiday weekend?”

“All right. But we’re only going to talk to him, right? We’re not going to accuse him of anything. We’re going to stay nice and calm.”

I scrutinized his blue-eyed gaze, unsure I believed him.

Listen to a Sample