The exciting 6th novel in the Jeff Resnick Mystery series! 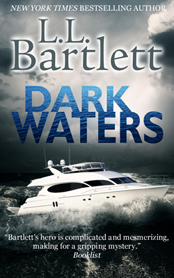 A near death experience is only the beginning of Jeff Resnick’s troubles. Family comes to town, but one of them, a nephew who reminds Jeff of the thugs who mugged him, has unsettled him. He’s on edge. The fact that his brother has taken possession of an expensive boat through an IRS auction takes his mind off the bad vibes he’s getting from other relatives. But that yacht holds a deadly secret, one destined to turn his world upside down. Will Jeff figure out the puzzle before his vision of near death becomes a reality?

“The Jeff Resnick series is going nowhere but up.  Anyone familiar with Jeff’s quirky psychic abilities gained as a result of his mugging knows that despite those abilities, he’s a pretty tough, intuitive investigator.  In Dark Waters he’s using his psychic abilities, but is now combining his own investigative experience, pulling the series to yet another level.  Resnick is tough, he’s gritty, but he’s also vulnerable and real.  Conflicts swirl and like the dark waters of the Niagara in this one.  Anyone with the ‘second sight’ will know that Dark Waters is not to be missed.

“Quill says:  If you are a fan of mystery, suspense is your game, and the thrill of a touch of paranormal, Jeff Resnick is your man!”
–Feathered Quill Book Reviews

“L.L. Bartlett has done it again by delivering a fast paced action-filled drama that took me on a wild ride in this riveting tale of suspense that quickly became a page-turner.  This is the by far the best book in this gripping series and I can’t wait for the next chilling adventures with Jeff and friends.”
–Dru’s Book Musings

Somehow, I managed to survive the trip across town for Sundowner’s Marina on the southeast shore of Grand Island. Da-Marr took control of the radio and blasted hip-hop, and Richard didn’t stop him. I grabbed a tissue from the box Brenda keeps on the backseat and stuffed my ears, which probably saved me from one of my skull-pounding headaches.

The marina’s parking lot was nearly empty. Not many people had come out to brave the gray day, choppy water, and gusty winds. Huddled in my jacket, I followed Richard down the dock to slip forty-seven, where we met up with Jerry Hasper, a local Slipstream salesman Richard had contracted to give us a quick-and-dirty overview on the ins and outs of boat ownership. I’d practically memorized the information I’d downloaded from the Internet, but reading and practical experience were two different things.

We stood on the dock staring at Richard’s beautiful new-to-us boat. The boat still bore the last owner’s moniker, “Easy Breezin’” in black vinyl letters on the stern.
“Damn, we need to come up with a new name,” Richard said, gazing at the sleek, white fiberglass beauty.

I ground my molars together. And I’d choose to call it anything but that. Why did this friggin’ kid think we needed his opinion on anything, let alone the name of our boat?
“Come on,” Jerry said, “let’s go aboard.”

Easy Breezin’ was one hell of a beautiful lady. With three sumptuous staterooms, cherry wood cabinetry throughout, and two heads, she had a tiny but elegant galley kitchen with Corian counters and a raised dinette. The area known as the salon was L-shaped with an ivory leather couch to port and matching barrel chairs to starboard. The whole area was enclosed by tinted sliding glass doors to the outdoor deck. Up top, the bridge deck was equipped with not only every boating mechanism known to man, but had conformable banquette seating for six, with a fridge and a wet bar that could host a pretty damn fine happy hour. The boat even had a washer and dryer. Easy Breezin’ had everything a man could want in a luxury yacht, and boy did I wish it was mine. That it now belonged to Richard was the next best thing.

For the next ninety minutes, Jerry took us through the ins and outs of boat ownership. From the tour of the engine room below—with two Volvo diesel engines—to the ins and outs of disembarking and docking, to battening down the hatches at night, he showed us how everything aboard operated, including the quiet flush toilets and the electronic anchor winch.

Da-Marr hung out in the salon, out of the wind, and was silent through most of the debriefing—bored out of his skull. But his eyes were shiny with delight when Richard turned the helm over to him—before he invited me to drive the boat. I kept my mouth shut, but my resentment toward the kid inched up another notch. Why did a stranger deserve more regard than Richard’s own flesh and blood? The thought made me feel petty, and my resentment toward Da-Marr cranked even higher.

“Wish the guys back home could see me now,” Da-Marr shouted, and hooted with glee from the helm.

“The kid’s really enjoying himself,” a smiling Richard commented from the banquette.
At least one of us was having a good time. I sat at the other end of the couch, watching our wake and wishing I was anywhere else. It was stupid to let the kid’s presence get to me. And I still hadn’t figured out what I was going to say to Brenda the next time I saw her.

“Do you want a turn at the controls?” Richard asked.

Hell yes! “No,” I grumbled instead.

“Come on, Jeff. Stop acting like you’ve got a stick up your ass.”

“We’re getting close to the end of the island,” I said as soon as I could see the North Grand Island Bridge up in the distance. There’s a point in the Niagara River where boat navigation is forbidden. Next up—none other than Niagara Falls.

Richard turned back to the controls. “We’d better turn back for the marina,” he hollered to Da-Marr.

“Come on, man, I’m just getting used to this beauty.”

“What about you?” he yelled back.

“Tell him to call in sick.”

I glared at Richard. “Tell him to go screw himself.”

Richard crossed the deck, nudged Da-Marr aside, and turned the boat around.
I never did get my turn at the wheel.

When we reached the dock, Da-Marr rose from his seat. “That was awesome. Better than driving a car past eighty.” And did he do that on a regular basis? “Hey, Richard. Got a buck so I can get me a Coke?”

“Sure,” Richard said and thumbed through his wallet, giving Da-Marr a handful of dollars.

“Thanks, man.” Da-Marr jumped onto the dock.

“Don’t go far,” Richard cautioned. “We need to get going.”

Da-Marr gave him a backward wave and started off toward the vending machines at the front of the dock.

Richard said nothing as he buttoned up everything inside, while I tossed out the bumpers and tied up the boat. If we’d actually known what we were doing, it would have taken a lot less time. I kept looking at my watch, wondering if I should call my boss and tell him I’d be late for work. My usual shift was at night—but Tom had a doctor’s appointment, and Dave, the other full-time bartender, wasn’t able to cover that day. They’d cut me slack so many times I’d have been a real bastard not to have agreed to help out.

Finally finished with our chores, Richard and I strolled up the dock looking for Da-Marr, but he was nowhere in sight. “Where the hell has he gone to?” I asked.

“He can’t have gone far,” Richard said reasonably, but we spent the next fifteen minutes wandering around the marina calling the kid’s name with no results.

“Brenda is going to kill me if I lose him,” Richard groused. He looked all around the area. “Do you think he could have gone back to the car?”

“Maybe. Why don’t you go look. If he’s there, blast the horn a few times to let me know. I’ll keep looking around here.”

I went back to Easy Breezin’, but Da-Marr hadn’t gone back there. I stopped in and asked the marina manager, but he said he hadn’t seen the kid since we’d first arrived. I was ready to abandon the search when I saw Da-Marr step onto the dock from one of the few boats that were still in their slips.

“What the hell do you think you’re doing?” I demanded.

“Checking out the competition. They got nothing on Richard’s boat.”

“You could get arrested for trespassing.”

An urban kid in a very white marina? What planet did this kid live on?

Since Richard hadn’t had good luck at the car, he met us half way down the dock where Da-Marr gave him the same song and dance routine about checking out the other boats.

“I met the guy at the Coke machine. He wanted to show off his boat. I was just leavin’ when pussy showed up.”

If I’d been close enough, I’d have kicked that son of a bitch in the balls.

“Please don’t do it again. If something happened, you might be falsely accused,” Richard said reasonably.

“Hey, I’m from the city. I can take care of myself,” Da-Marr bluffed and took off for the car.

Richard hadn’t moved. “What is your problem?”

“I’m going to be late for work because of him.”

Richard shoved his index finger in my face, his expression livid. “You will not insult my houseguest and you will behave like an adult.

Damn, Da-Marr. At that moment I felt sure I could kill the little bastard.

I looked away and stalked off in the direction of the parking lot.

Da-Marr was already sitting in the passenger seat, looking triumphant as I climbed into the Mercedes’ back seat. Richard got in and started the engine. “So you made a friend?” he said as he steered out of the parking lot.

“I guess,” Da-Marr muttered. “The guy said the boat belonged to his father. I don’t go round askin’ people for proof.” He reached over and switched on the radio once again, cranking up the volume.

I saw Richard look back at me via the rearview mirror.

If what Da-Marr said was true, then I looked like a jerk for tattling. But what if he was lying? There was no way I could prove it, so I kept my mouth shut. I looked at my watch and fumed. I pulled out my cell phone to call the bar. “Can you turn that down,” I shouted.

Instead, Da-Marr pressed the button and the decibel level rose exponentially.
Richard reached over and hit the off switch. “Jeff’s got to make a call,” he said reasonably, but Da-Marr glanced over his shoulder and glared at me.

As I punched up the number for the bar, I had a feeling I was going to pay for the exchange that had just taken place. 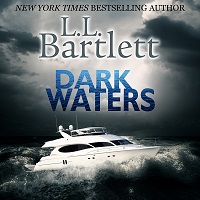