The Murder on the Mind Extras Page

Keep scrolling! You’ll find artwork, a great map of Jeff’s Buffalo,
character sketches, and an epilogue that was cut from the
original print book! (Alert: spoilers live there!).

My short story, COLD CASE, in the Mystery In Mind anthology, is the first published work featuring Jeff and Richard. 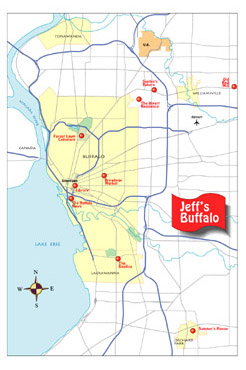 First Case: After being bonked on the head by a mugger with a baseball bat, I experienced what I believed to be bad dreams, but later came to understand were visions—of a gruesome death—which led me to investigate the murder of a bank vice president.

Pet Peeves: People finding about my…psychic affliction. (Believe me it’s not a gift.)
Liver. In any way, shape, or form.

Role Model: None. I’m too cynical.

Sidekicks: Jeff Resnick. (half-brother) and my significant other, Brenda Stanley.

Characteristics: 6′ 2″, brown hair, blue eyes, and a magnificent mustache (if I say so myself).

Pet Peeves: Intolerance.  Cruelty to children, the elderly, and animals

AUTHOR’S NOTE: Before I signed with my third agent, she read MURDER ON THE MIND and requested a number of changes. Among them was deleting the epilogue. She thought that tying up the loose ends would make it seem like a stand-alone novel, instead of the first book in a series. (I still don’t agree with that thought…but at the time I very much wanted very to sign on as her client.) Originally, Jeff and Maggie were to begin a relationship in the first book, but my agent felt that needed to come later in the series. So Maggie’s part was made smaller and newspaper reporter Sam Nielsen’s part was made bigger. However, I’ve left references to Maggie as they were originally written in the epilogue below.

EPILOGUE … Murder on The Mind

It’s true what they say about doctors being the worst patients. Once Richard started feeling better, he became cranky and bossy—totally unlike his usual self. But Brenda and I suffered through his moods, keeping him company from the time visiting hours started until the nurses threatened us with the hospital security forces to get us out at night.

Maggie visited several times, bringing him flowers and us care packages. Her presence forced Richard to be almost as nice as usual. Brenda and I bought a chess game at the toy store before visiting one day, and that kept Richard—and me—occupied for hours on end, while Brenda patiently worked on her needlepoint or read magazines.

Sharon Walker wasn’t as lucky. No one came to visit her in jail. Three days after her arrest, the cops found her hanged in her cell. Hayden called me even before the press was notified to ask if I’d seen it coming. I hadn’t. Once the cops had taken her away from the church, I didn’t give the woman more than a passing thought. I wondered if the guilt trip I’d laid on her about her father had influenced her that much. Had I inadvertently caused her death?

They buried her in her family’s plot at Mount Olivet Cemetery. Some macabre part of me wondered if Ted Schmidt had dug and then danced on her grave.

The police found enough evidence at her house to convict her, and although he was only four years old, her son turned out to be a credible witness to Sumner’s murder—for all the good it did. In my mind, justice had more or less been served.

Sharon had no other family and true to form, Rob Sumner did not claim his child from Social Services. I felt bad for the kid. I hoped little Jackie—or Jimmy, as his mother had called him—would be placed in a foster home where he’d find some semblance of a normal life. Maybe one day be adopted. Toward that end, after I told him what happened, Richard called his lawyer and set up a trust for the kid, assuring psychiatric help and anything else the boy needed. It was the first step in what Richard called “unloading some of that damned money.”

The kid would probably have a better life without Sharon.

Yeah. Sure he would.

As a result of Sam Nielsen’s newspaper articles, I received several job offers; two were from crackpots, one seemed genuine. That is, until I inquired about their health care benefits and outlined my particular problems, then they no longer wanted to interview me. The answering machine took the bulk of the crank calls.

I stopped by the bakery—twice—for more placek and conversation, but Sophie wasn’t around. I wasn’t about to give up on her. I’d just have to keep trying.

Spring sunshine warmed the air six days after Richard was shot—the day he was released from the hospital. The crew from the sporting goods store had only been gone five minutes when the Lincoln pulled up the driveway. Richard and Brenda were late getting home from the hospital.

Richard got out of the passenger side of the car, looking pale, but smiling. Other than his arm in a sling, there was no outward sign of his near-death experience.

I greeted him with a basketball tucked under my still-healing arm.

“Looks great,” he said, indicating the new backboard over the garage door.

“Yeah, and in another couple of weeks we can use it.” I dribbled the ball on the driveway, tried a one-handed lay-up shot and missed. The ball bounced once and rolled away from me.

“Yeah,” I repeated, embarrassed, “another couple of weeks.”

Brenda got out of the car and joined us; her body language said she was wired. I looked at the two of them, sensing something was definitely going on.

Richard glanced at her. “You want to tell him, or should I?”

In answer, she peeled off the leather glove on her left hand, flashing a large diamond ring. “We stopped at the jewelry store on the way home. Isn’t it gorgeous?”

Delighted, I took her offered hand, noticing how the sunlight reflected off the many-faceted stone. “Nice. Congratulations.” I stopped myself. “No, you get best wishes,” and I leaned forward and kissed her cheek. “You get congratulations.” I shook Richard’s hand. “When’s the date?”

“Oh, who knows,” Brenda said and laughed, “but sometime soon. And we want you and Maggie to stand up for us. Then we’re going to Paris for a honeymoon. Won’t that be great?”

A swell of well being coursed through me. On impulse, I drew them into an awkward group hug.”

Be sure to check out the other Extras pages!