Got an e reader?  Find out why more than a million readers have downloaded Murder On The Mind. It’s FREE for all e formats (see links below). 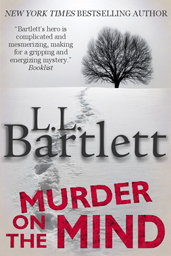 Murder on The Mind
(Jeff Resnick Mystery #1)
By L.L. Bartlett

Jeff Resnick hardly knew his well-heeled half-brother. But after suffering a fractured skull in a vicious mugging, he reluctantly accepts the fact that he has a long and brutal recovery to face—and his closest of kin can provide him with the time and place to do it.

Now, Jeff is haunted by unexplained visions of a heinous crime—a banker, stalked, killed, and eviscerated like a ten-point buck. When Matt Sumner’s murder is discovered, a still-recovering Jeff realizes this was what he had seen. Jeff must not only convince himself of his new-found psychic ability, but also his skeptical brother Richard Alpert. Since Sumner was Richard’s banker, both brothers have a stake in finding out what happened. With Richard’s reluctant help, Jeff’s investigation leads him to Sumner’s belligerent family and hard-nosed business associates, none of whom want him snooping around.

When Jeff discovers a second victim, he knows he must relentlessly chase his quarry even if it means risking his brother’s life. 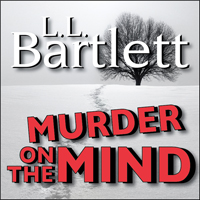 LISTEN TO A SAMPLE 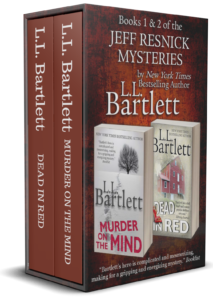 And as a trade paperback!

“This is a high-powered drama filled with interesting characters that add dimension to a tightly paced story with a good kick at the end.” — RT Book Reviews

“With just the right balance between psychic insight and detective work, between detection and action, Murder on the Mind is a fast-reading page-turner. Jeff Resnick is a compelling character, with a real personal life and family issues to sort through–as well as having to solve a crime in which he holds a personal stake.” –Never Trust a Dead Man

“Well written … I got deeply drawn into this book and couldn’t stop!”
–Fangirl Nation

“Murder on the Mind” is a fast flowing book. The characters keep you interested in their next moves, their next thoughts, and what the end will bring. I highly recommend this book. —Claire Gilligan, Reader Views

“Enjoyable reading: human emotions — along with fast paced action.” — I Love A Mystery

“Murder On The Mind catches your interest from page one.” — BestSellersWord.com.

“Nicely written and quite twisty.” — The Book Bitch

“Put yourself in Jeff Resnick’s shoes: You’ve suffered brain damage from a vicious mugging, and now you ‘see’ allegorical visions of murder in troubled nightmares and in even more troubling, conscious hallucinations. L. L. Bartlett does a wonderful job of showing us how difficult such a life can be as Jeff tries to overcome his own tragedy by using his new gift to investigate others. Beautifully written in a stark, spare style, MURDER ON THE MIND is a perfect choice for anyone open to a paranormal thread in a lovingly woven crime novel.” —Jeremiah Healy, author of Turnabout and The Only Good Lawyer

“With her original and interesting protagonist Jeff Resnick, an insurance-investigator turned psychic when a mugger injures his head, Bartlett has brought us a fresh, entertaining story. I was thrilled to discover this novel, and I know there are a lot of readers out there looking for something new. Try this book!!” —Judy Clemens, Anthony and Agatha-nominated author of the Stella Crown mystery series.

“Resnick is a fine character, with a strong sense of right and wrong. This is a page-turner.” —Barbara D’Amato,author of Death of a Thousand Cuts

Something walloped me in the gut. A hit without substance-without pain. It sucked me from the here and now to a vacant place where a hollow wind brushed my ears.

There. In my peripheral vision: Coming out of the mist. An animal. A deer. A buck.

I blinked and was back in the bar, bending over the felt-lined table.

“You gonna shoot or not?” Marty growled.

My fingers tightened around the cue, which stopped their sudden trembling. I held my breath as I made the shot. The cue ball kissed the six and sent it into the left corner pocket. I straightened, trying to hide the unexpected panic churning my insides. “That’s another five bucks you owe me.”

Marty chewed the unlit stub of his cigar, fumbled with his wallet, and dug out a crisp five-dollar bill, slapping it onto the table. “Double or nothing.”

Uh-uh. I needed to get out of there. Think about what had just happened to me.

“I’d love to, but I start a new job first thing in the morning.” I snatched up my winnings and replaced the cue stick on the wall rack. O’Shea’s smoky, blue-collar friendliness had been a haven from boredom and loneliness, reminding me of the taverns back home in Buffalo, only it was pool, not darts, that drew the Sunday night crowd.

“Go ahead, leave,” Marty grumbled, gazing down the length of his cue. “But be back here-same time next week. Me and the boys are gonna win back everything you’ve taken from us.” His break shot went wild. He should’ve stuck with darts.

“In your dreams,” I said, and shrugged into my leather bomber jacket.

“Are y’leaving so soon, Jeffrey?” Pretty Annie McBride, an Irish lass of about twenty-five with a killer smile, hefted a tray of drinks as she served a couple at a nearby table.

“An’ when are y’going ta ask me out? I’m not getting any younger, y’know.”

I eyed her appreciatively but considered my thin wallet. “Soon.”

“I’ll be collecting Social Security at this rate.”

“Forget him, Annie,” said Ian from behind the bar. “Find yourself a nice Irish boy.” He winked at her.

“I’m half Irish,” I countered to a round of laughter from Ian and the regulars. “My mother was an O’Connor-you can’t get much more Irish than that.”

“Never you mind them, Jeffrey,” Annie said. “But don’t wait too long, or I will find me some nice Irish lad.” Annie smiled kindly and headed for the kitchen. I watched the door swing shut behind her.

Marty and another patron were already engrossed in a new game as I headed for the exit. “G’night, all.”

A chorus of goodbyes followed as I left the pub.

I set off at a brisk pace, heading for my apartment three blocks away. A March thaw had melted the snow, but the temperature had plunged back to freezing and the bracing air soon cleared my head. The pub had been overheated and reeked of stale beer and sweat. No wonder I’d zoned out.

I thought of the cash in my wallet. Maybe my good luck at pool would stay with me when I started the job at Metropolitan Life. My unemployment benefits were about to end, so I’d been desperate to take the entry-level insurance claims job.

Hands stuffed in my pockets, I watched my feet as I walked. After I got that first paycheck, I’d ask Annie out. It had been months since I’d had any feminine companionship, and celibacy is highly overrated. I just hoped Annie’s friendliness wasn’t a put-on to get a good tip.

Traffic was sparse as I crossed Third, the sidewalk empty as I headed past the caged-in businesses that lined the street. I was usually cautious, but thoughts of the new job and what had happened at the bar distracted me as I dodged the miniature skating rinks on the cracked pavement. The next day would be nerve-racking. New names, new faces. Probably a backlog of case files, too.

“Hey, dude, got some spare change?”

A gust of frigid wind grazed my cheek. I jammed my hands deeper into my jacket pockets, tried to get past him.

“Hey, asshole, I’m talkin’ to you!” The hefty teenager stepped into the lamplight, grabbed my jacket. Another figure emerged from the darkened doorway of a closed deli. Though shorter, the other kid brandished a worn baseball bat, looking just as threatening. I avoided his glare and the challenge in it.

In spite of the freezing cold, I broke into a sweat as I pulled away from the kid’s grasp. “Hey, guys, I don’t want any trouble.”

“Then give us your money.”

Damn. I’d just won fifty bucks at the bar and now a couple of two-bit punks were going to shake me down for it. But I’m not stupid.

I thumbed through my wallet. “You can have what I got.”

“Is that all?” the shorter kid asked, slamming the bat into his palm. “You got a ATM card? We gonna go visit your bank.”

“I’ve been out of work for months. There’s no money left.”

The big guy grabbed my left arm in a vise-grip. “Lester, why don’t you introduce our friend here to Reggie.”

Lester flaunted the wooden bat so that the logo burned into it was visible in the lamplight. A Reggie Jackson special, decades old but just as lethal as the day it was made.

“Reggie wants to teach you a lesson,” Lester said.

I took a step back, yanking my arm from the linebacker.

Across the street, a hooker ducked into one of the doorways. Distracted, I almost didn’t react as Lester swung the bat. I dodged, catching him with a satisfying kick to the groin. The bat went flying and he sank like the Titanic.

His friend snatched the bat, heading for me like a killing machine. I stepped back, raised my left arm to fend off the blow, but he caught me. The audible crack of bone sent me staggering. Skyrockets of pain shot up my arm.

The bat came down again, slamming into my shoulder, knocking me to my knees.

Icy water soaked through my jeans.

The bat came at me from the left, crashed into my temple, and my head hit the pavement. My vision doubled. Stupidly, I tried to raise myself as the bat connected with my skull once more.

Damn, I thought just before losing consciousness. I wasn’t going to make it to my new job in the morning.

I drifted from painful reality, lost in some misty wilderness. I’d escaped one nightmare . . . but escaped to where?

Tangled sensations enveloped me-rising dread, irrational fear. The mist began to evaporate, and I focused all my senses on the emotion.

From out of the void, a figure approached, surrounded by an aura of smothering emotions. Hatred, revenge-it spewed these and more. Unable to bear the torrent, I tried to turn away. The figure–a hunter–stalked its prey, but instinct told me I was not the quarry.

It paused in its search. The intensity of its rage choked me–kept me from taking a decent breath. I thought I’d pass out when the stalker moved away. Horrified, yet fascinated, I couldn’t tear my gaze from the dark, retreating figure. What was being hunted? Why couldn’t I see it, warn it?

I shuddered, afraid of the bizarre, gruesome death I knew was to come.

The figure faded into the surrounding emptiness, and I began to relax.

I was only dreaming, after all.